High Peace Council Chairman of Afghanistan has passed away 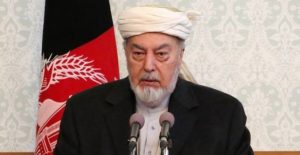 The embassy of Afghanistan in Kuala Lumpur were saddened to learn the news of the passing away of High Peace Council Chairman Pir Sayed Ahmad Gilani on Saturday in Kabul.

Pir Sayed Ahmad Gilani was born in 1932 and he was the leader (Pir) of The Qadiriyyah Sufi order in Afghanistan, and the founder of the National Islamic Front of Afghanistan ( Mahaz-i-Milli Islami ye Afghanistan), a Mujahideen Party which led the Jihad against the Soviet Union in the 1980s. As a chairman of High Peace Council, he had been a strong proponent of peace talks and had many achievements.

The Embassy of Afghanistan offer deepest sympathies and condolences with the members of his family and the people of Afghanistan. May the Almighty Allah rest his soul in peace, grant him a place in Jannat-al-Firdous. Aameen