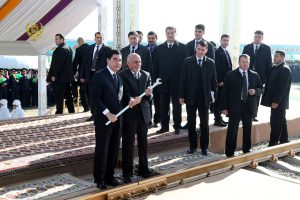 Afghan President Mohammad Ashraf Ghani and his Turkmen counterpart Gurbanguly Berdymukhamedov officially inaugurated the first section of a USD 2bn link connecting the two neighbouring countries for the first time.
Berdymukhamedov said: “the project is written in golden letters in the history of our brotherly nations.”

He added that the terminal could hold up to 500 tons of commodities and could play a key role for oil traders.

The Afghan government has envisaged Afghanistan as the linking bridge in the region and has stepped up efforts to open new transit routes.

Earlier in September, the first ever cargo from China arrived on Afghan soil through the Hairatan port.

Afghanistan also finalized the deal with Iran and India on the Chabahar Port.
Turkmenistan and Afghanistan are also participants in an ambitious USD 10 billion pipeline plan to send Turkmen gas to Pakistan and India.

In the name of God, the Compassionate, the Merciful. Ambassador Ischinger, Minister Von Der Leyen, ...