The Minister of Foreign Affairs 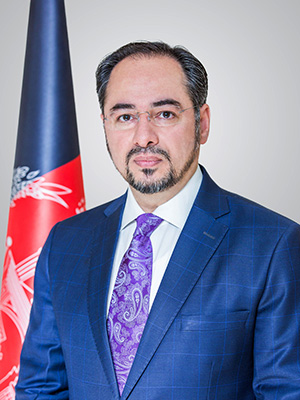 Biography of H.E. Salahuddin Rabbani
Minister of Foreign Affairs of the Islamic Republic of Afghanistan
Mr. Salahuddin Rabbani was born in Kabul on May 10, 1971. He earned his BSc in Management and Marketing from Saudi Arabia’s King Fahd University of Petroleum and Minerals in 1995. He then served in the Financial Accounting department of Saudi Aramco before moving to the United Arab Emirates to work in the private sector in 1996. Mr. Rabbani received his MA in Business and Management from Kingston University in the United Kingdom in 2000.
He subsequently joined the Ministry of Foreign Affairs of the Islamic Republic of Afghanistan, serving as Political Counselor at the Permanent Mission of Afghanistan to the United Nation in New York. During his tenure, he represented Afghanistan in the First Committee of the United Nations’ General Assembly on Disarmament and International Security, and also covered a wide-range of issues at the UN Security Council related to international peace and security.
In 2006, he left the Ministry of Foreign Affairs to pursue his second post-graduate degree at Columbia University’s School of International and Public Affairs, and completed his MA in International Affairs in 2008.  Soon after, he returned to Afghanistan and served as a Political Advisor to his late father, Former President Prof. Burhanuddin Rabbani, who continued to play a constructive role in the country as head of the Jamiat-e-Islami political party and first Chairman of the High Peace Council.
In 2010, Mr. Rabbani was appointed Ambassador of the Islamic Republic of Afghanistan to the Republic of Turkey.  Following the tragic assassination of his father in September 2011, he was selected head of Jamiat-e-Islami.
In March 2012, then Afghan President Hamid Karzai appointed Mr. Rabbani as the new Chairman of the Afghan High Peace Council. His appointment was supported and endorsed broadly by the members of the Council. As Chairman, he succeeded his late father in leading a comprehensive national dialogue effort, aimed at initiating talks with elements of the armed opposition for a peaceful settlement to the Afghan conflict.
Following the formation of the Government of National Unity, Mr. Rabbani was nominated by H.E. President Ashraf Ghani to serve as the Minister of Foreign Affairs of the Islamic Republic of Afghanistan in January 12, 2015.  His nomination received vote of confidence by the Afghan Wolesi Jirga (Parliament) in January 28, 2015, and just days later, on the February 1, 2015, he was sworn into office.
Mr. Rabbani is married and has four children.