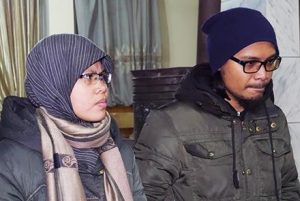 Afghanistan National Olympic Committee on Sunday welcomed the two Malaysian cyclists who recently arrived in Afghanistan bringing with them messages of peace and solidary.

The Malaysian cyclists are expected to leave Afghanistan in the next few days for Iran. They will make their way through the border in Herat province.

The cyclists have travelled over 10,000 km, in an epic journey that will end in Saudi Arabia.

According to the Olympic committee, the arrival of the Malaysian cyclists in Afghanistan was a milestone in promoting peace and stability in the country. Their visit was also hailed as a boost for cooperation and bilateral relations between the two Muslim nations.

The Malaysian cyclists said that they want to show the world that Islamic nations support global peace and stability efforts and that they condemn war and violence around the world.

“We are delighted to be here in Afghanistan; this will further promote our relations; we are conveying a message of peace and to say that Islamic countries never support war and they always support promoting peace,” said Malaysian cyclist Amirul Arif.

The cyclists hope to perform the Haj pilgrimage when they finally reach their destination.

The couple, who arrived in Kabul on Friday, said they entered Afghanistan through Hairatan port and visited historical sites in northern Balkh province while there.

They said they set off from Malaysia 10 months ago and are visiting Islamic heritage sites along the way.

So far they have cycled through nine countries and visited mosques and other cultural sites along the way. They have however used trains and buses when needed, they said.

According to them, they are now waiting for their Iranian visas and once these have been approved they will enter Iran through Herat province.